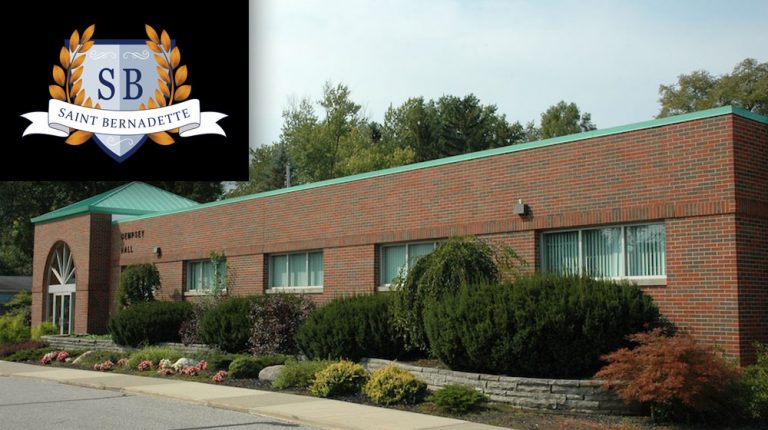 Built in 1950 and opening in 1952, Saint Bernadette School began with five classrooms and has grown into a school
that accommodates two classrooms for each grade ranging from kindergarten to eight grade.

The school building, which encompasses approximately 50,000 square feet laid out in a large square design with a courtyard, is constructed of solid concrete, making it difficult to deploy a network infrastructure.

The Need: A Reliable, High-Performance, High-Density Wireless Network
The inability to reliably access the Internet from wireless devices can render even the best technology devices ineffective. This was the issue facing Saint Bernadette. According to Chad King, an IT consultant with Shoreworx Communications, in addition to the concrete building construction, there were a number of issues contributing to the wireless network infrastructure problems at the school. “Every other classroom had at least one Cat 5e cable going to it with an older access point in the drop ceiling,” King stated. “The were experiencing dead zones, access point hopping, and the ability to have more than 25 clients leasing an IP address off of one access point at any given time.”

King explained that the critical need for a reliable wirelessnetwork infrastructure providing coverage throughout the entire building was driven largely by the technology being used by the students. “The school had a large number of iPads on a learning cart and on certain days they could have up to 70 iPads running on their network throughout the building,” he said. “The school needed the portability that comes with a Wi-Fi infrastructure. Adding to the requirement for a high-density wireless network infrastructure was a learning center that is home to approximately 50 iMac computers.

The Solution: EnGenius EAP600 High-Powered, LongRange Ceiling-Mount Dual-Band N600 Indoor Access Point
Based upon their previous experience with EnGenius products, Shoreworx Communications decided to deploy the high-powerEnGenius EAP600 Dual Band N600 Indoor Access Points throughout the property. “Compared to the EnGenius product, other manufacturers’ products were cost-prohibitive when considering the quality of the products,” stated King. “The ability of the EAP600 to support multiple SSIDs, VLANs and the latest in WPA2 encryption, plus the ability to turn the radio’s power up to increase the coverage made EnGenius the most attractive Wi-Fi solution.”

Shoreworx deployed 24 EAP600 accesspoints to cover the entire property, including the cafeteria and the gymnasium. Prior to deploying the access points, King consulted with one of EnGenius’n sales engineers for advice regarding the deployment. “I found him to be extremely helpful,” said King. To minimize the onsite deployment time, Shoreworx pre-configured the access points before installing them in the school. King said that this made installation a breeze. “We simply climbed a ladder and connected each of the APs and mounted them to the drop ceilings using existing EnGenius hardware.”

The Results: Reliable, High Speed Wireless Internet Connectivity Throughout the School
After all 24 accesspoints were deployed, it was time to put the network to the test. “Using a Fluke and a Wi-SPY Metageek antenna and Channelyzer Pro application, we walked around with a MacBook Pro verifying the Wi-Fi footprint,” King explained. “The EnGenius access points provided more than enough to cover the entire school.”

King then conducted real-world testing by streaming a Netflix movie to an iPad. “If you can walk the whole school without the Netflix movie dropping even once then they should not have any problems using their iPads,” King said. “In fact, we walked the whole area performing this test while the school’s network administrator observed. He was very impressed!”