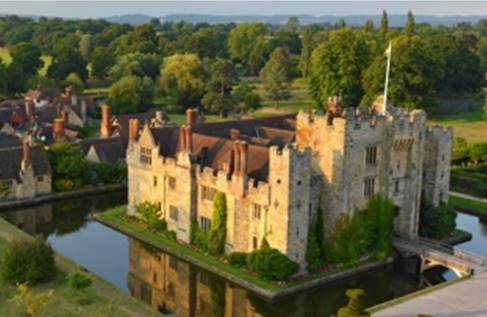 Spanning more than 700 years, the history of Hever Castle is rich and varied. The original medieval
defensive castle, with its gatehouse and walled bailey, was built in 1270. In the 15th and 16th
centuries it was the home of one of the most powerful families in the country, the Boleyns, who
added the Tudor dwelling within the walls.

Hever later passed into the ownership of another of Henry VIII’s wives, Anne of Cleves, and from
1557 onwards it was owned by a number of families including the Waldegraves, the Humphreys and
the Meade Waldos.

Gradually it fell into decline before William Waldorf Astor invested time, money and imagination in
restoring the Castle. He commissioned the ’Tudor Village’, now called the ‘Astor Wing’ and the
construction of the magnificent gardens and lake. At Hever, his wealth and vision enabled him to
create a lavish family home that also indulged his passion for history.

Today Hever Castle, set in 125 acres of parklands and gardens, is a major visitor attraction. It is open
to the public and has 5* accommodation set in the Astor wing comprising 28 rooms and suites and a
four bedroomed cottage surrounding, all set around the castle. It has numerous themed events
during the year, whilst hosting large corporate events and weddings.


As a luxury venue, Hever Castle prides itself on its first class facilities to guests, and attracting a larger number of visitors every year, the existing WiFi had outgrown its ability to cope with the increasing numbers of users.The EnGenius Neutron Solution was tasked to provide high availability and high through-put for both “guest” and “corporate” users. The EnGenius EWS350 ac enabled access point was selected and a site-wide survey was conducted The buildings themselves presented a particular challenge due to their solid construction; this was especially evident at corporate events which can have in excess of 200 users in a single space such as
the Tudor Hall or the Pavilion. There was also a requirement to provide Free WiFi to the thousands of visitors at any one time across the site and the site is widely used in TV films and productions and the media use of the WiFi can be very demanding and bandwidth hungry.

The site has 38 EnGenius Neutron internal access points and controller (which offers local and remote management) giving a major boost to providing a better all round customer experience. External Neutron Access Points provide WiFi sitewide covering the visitor attractions and at various locations across the 125 acre site, including the gatehouses, to enable mobile ticketing machines to be used. The external Neutron Access Points allow for mobile roaming from the Castle entrance to the restaurant.